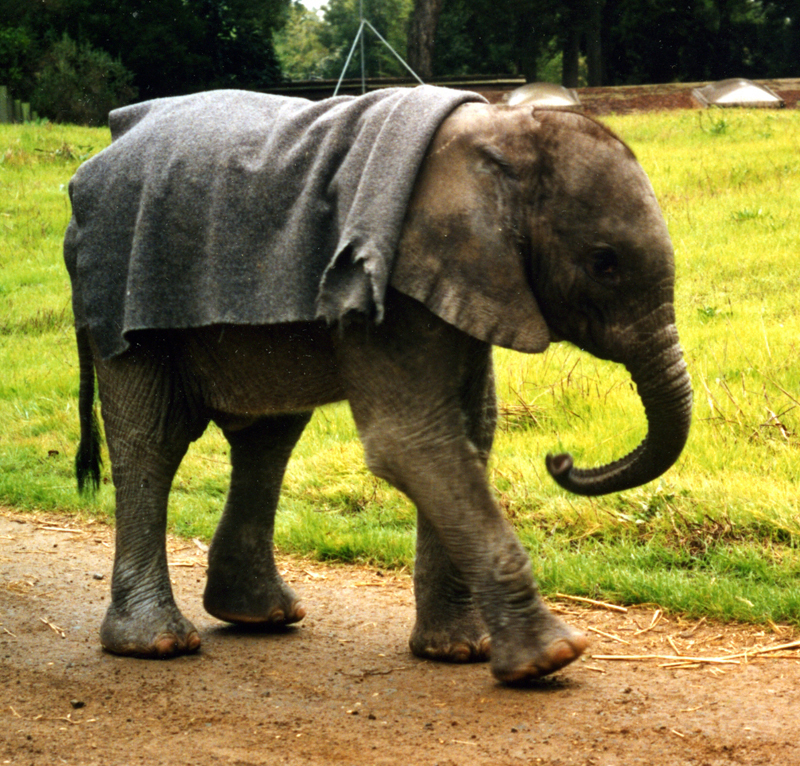 Kijana at 3 months of age

Had you walked into the elephant barn at the Oakland, California, zoo on any given night in 1996, you might have seen a baby elephant snoozing peacefully, his trunk casually flung across the person sleeping next to him. Three nights a week that person was Colleen Kinzley, the zoo's head curator. Together with six others, she was attempting to hand-rear baby Kijana, the first African elephant born in captivity since 1984. But the zoo's cozy surrounding belied what was really a desperate struggle to help the young elephant survive.

Kijana’s birth came as a surprise. There had been no sign that his three-and-a-half-ton mother, Lisa, was pregnant with a 190-pound baby until Colleen discovered him when she reported for work on a mild November morning in 1995.

"The calf wasn’t standing," she says. Whenever the baby tried to get to his feet, Lisa ran at him threateningly, always stopping just short of him. "She was nervous," Colleen recalls, "and she seemed to be uncomfortable when he moved around."

Lisa was just seventeen years old - not fully grown - and had been raised in captivity herself. Remembering that day, Colleen frowns. "She just didn’t know how to take care of him."

For two hours handlers watched for signs that Lisa would begin mothering her baby. When she continued behaving aggressively, they knew that, to protect the calf, they would have to remove him from his mother. They distracted Lisa with food and took the baby out of the yard.

The zoo staff realized that the calf would have to be bottle-fed and phoned the five other North American zoos for advice. Colleen and her coworkers fed Kijana Enfamil (a milk substitute used for human babies) until they found a laboratory in Canada that could make a formula similar to elephant milk.

Just two weeks after Kijana was born, Donna, another member of the Oakland herd gave birth to a calf, too. Unfortunately, her baby was seriously injured during birth and didn’t survive. Although she mourned her loss, Donna wasn’t interested in adopting Kijana. However, she did allow keepers to pump milk from her three times a day for a few weeks.

"It was a pretty small portion of Kijana’s diet," said Colleen. "He drank between fifteen and nineteen quarts a day, and we were only getting a quart from Donna each day." She hoped he'd receive some nutrients and some disease-fighting antibodies from Donna, but "the big benefit was getting to analyze her milk to make changes in the formula." As the needs of the growing calf changed, Colleen saw a change in the fat and protein content of the milk. "We wanted to make sure we could mimic nature as closely as possible."

But Colleen and the zoo staff were concerned with more than Kijana's diet. In the wild, female elephants are attentive parents. They keep their babies close and nuzzle them often. Kijana had to make do with caresses from his human keepers, who stayed with him throughout the day. For the first several weeks, there were two keepers with him at all times. "He occasionally wandered away from us," Colleen says, "but not far. He needed to know that we were right next to him."

Kijana had regular contact with the older elephants, but "none of the adults was really receptive to him," Colleen said. "And, of course, he'd imprinted on people, so he wasn't that interested in the elephants."

In the wild, Kijana would have lived with his mother in a herd made up of two or more older females, their children, grandchildren, and great-grandchildren. All of the females would have assisted in the birth and care of Kijana. But because his mother was brought from Africa when she was just a year old, she probably had no memory of natural child-rearing practices.

Although seven different people worked with Kijana in shifts, "he would certainly have preferred to be with just one person, like a calf with its mother," Colleen says, "but it just wasn't possible to do that." It was easy to see why he kept seven people occupied. Using his trunk, Kijana would explore anyone and anything that entered his enclosure. Colleen was continually unwinding his trunk from the purse straps, camera bags, and jacket corners of his visitors. And like elephant calves in the wild, he liked to head-butt his companions. Behind his friendly shove, however, was a three-hundred-pound force, and Colleen and the others had to intervene to keep him from injuring someone. Besides, she adds, "it was important that he be comfortable with several different people. It would've been dangerous if something had happened to that one person that he was imprinted on."

As the months passed, Kijana grew under Colleen's care. Then something happened. Just four weeks before his first birthday, Kijana developed an infection and died suddenly. Zoo officials later discovered that a form of the herpes virus was responsible for his death.

Even in the wild, it’s not unusual for a baby elephant to die in its first year. Normally they gain some protection against disease from the antibodies in their mother’s milk. Because Kijana was not fed by his mother, he was more susceptible to infection.

In his short life, Kijana touched the hearts of many people, drawing thousands to the Oakland Zoo. The rest of the world must help poorer African nations protect their herds. Knowing the plight of the African elephant, many of Kijana’s admirers are now contributing to organizations that work to save the elephants.

It takes 22 months for a baby elephant to develop inside its mother. At birth a standing calf reaches its mother’s knee. Calves spend most of their time underneath or next to their mothers. Though females stay with the family unit throughout their lives, males leave when they’re about 14 years old.

Elephants are vegetarians, eating grass, leaves, fruit, branches, and twigs. In one day a wild elephant will eat anywhere from 100 to 1000 pounds and drink 30 to 50 gallons of water.

In the wild, elephants may live 70 years, but they’re often hunted for the ivory in their tusks, and African elephants are now an endangered species. Though hunting has been banned, illegal poaching continues, and humans have vastly reduced the elephant's habitat.