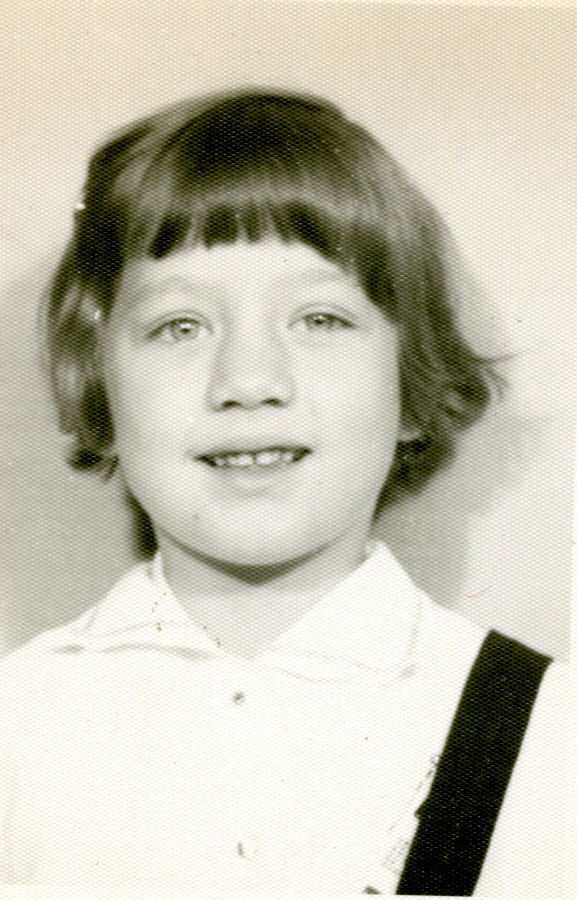 Jeanne in first grade, where she FINALLY learned to read

I grew up near Saegertown, a small town in northwestern Pennsylvania. My childhood was a time of plenty: plenty of animals - dogs, cats, pigs, chickens, turkeys, horses; plenty of fresh food from our garden and fruit trees; and plenty of books.

The farm animals gave me respect for the natural behaviors of domesticated animals; the fresh produce gave me an appreciation of seasonal eating (and an education in food preservation); and the books gave me a broad experience of the world and its possibilities - and ultimately a career as a writer.

I remember before starting to school how I longed to learn to read. I was the youngest in my family and everybody else spent every spare moment reading. I compensated by memorizing some picture books and "reading" them to my younger cousins, who were impressed with my precocity. After I finally learned to read, weekly trips to the library over the years peopled my world with the much-loved characters from Heidi, The Boxcar Children, Miss Hickory, Anne of Green Gables, Girl of the Limberlost, Nancy Drew, and hundreds of other books.

After high school I earned a B.A. in English at Edinboro University of Pennsylvania. I then moved to Chicago and got a job at the University of Chicago. City living suited me; having theatre, films, museums, lectures, restaurants, and bookstores so close at hand was exhilarating. Among my friends were many graduates of the University of California in Berkeley. They convinced me that Berkeley was even better than Hyde Park, the south-side neighborhood where I was living. So after four years in Chicago I relocated to Berkeley, where I met my husband-to-be and where I've lived ever since.

Shortly after my arrival I enrolled in San Francisco State University's graduate program in English. Before earning a degree, though, I quit to become a doll maker and to teach classes in making folk dolls. That career ended when my husband and I produced our own little doll, Beni, who is now in his thirties. His birth was my inspiration for learning to write for children. I've been writing on science topics for children's magazines since the mid-1990's and am now working on book-length projects.

In November 2011 one of my articles, "Skywalking for Science: Aloft in Redwood Space" (ODYSSEY, April 2011), was chosen for an AAAS Kavli Science Journalism Award in the children's science news category. The awards were granted at a ceremony at the meeting of the American Association for the Advancement of Science in Vancouver, B.C., in February, 2012.

I was honored to again be a recipient of an AAAS Kavli Science Journalism Award in the Children's Science News category in 2018 for an article about the campaign to eradicate Guinea worm disease. The article was "Fighting to the End" in the October 2017 issue of MUSE magazine. The award ceremony was in February, 2019, at the American Association for the Advancement of Science meeting in Washington, D.C. (See the announcement under Quick Links.)

I live with my husband, Charles Siegel, who is also a writer, in a century-old house near the University of California.